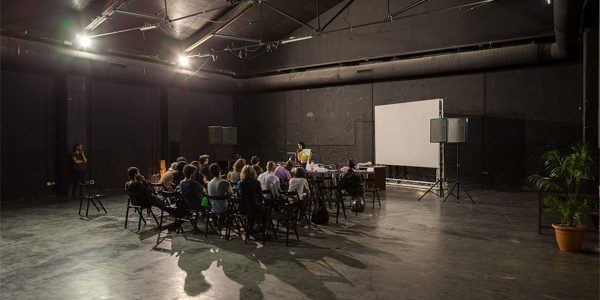 4 p.m. WELCOME AND PRESENTATION
By Arnau Monterde and María Lladó

Renowned new media theorist Geert Lovink (Amsterdam, 1959) founded the Institute of Network Cultures in 2004 with the aim of exploring, documenting and nurturing the potential of new media to contribute to cultural and socio-economic changes. He is the author of Uncanny Networks (2002), Dark Fiber (2002), My First Recession (2003), Zero Comments (2007), Networks Without a Cause (2012), Social Media Abyss (2016), Organisation after Social Media (with Ned Rossiter, 2018) and Sad by Design (2019). His recent projects are about digital publishing and the future of art criticism.

Through a series of dialogues between artists, scientists, technologists, thinkers and activists in the space of the Canòdrom we want to share experiences and reflections on the themes, processes and methodologies used in the framework of the artistic research-production residency program developed jointly with Hac Te, Barcelona’s art, science and technology hub, and some of its partners such as the Barcelona Supercomputing Center, the Institute of Photonic Sciences or the centers attached to the Barcelona Institute of Science and Technology. The different artistic research-production processes developed at Hangar and the Caldera Performance Arts Center by scholarship artists such as Estampa, Andy Gracie, Oscar Martin, Esther Rodríguez-Barbero or Anaisa Franco will be the guiding thread of the talks, which seek to invite us to rethink the hybrid space of knowledge, methodologies and epistemologies generated in the framework of the transversal initiative presented here. With these dialogues we aim to delve into the processes of (de)construction and care of spaces for interdependence between disciplines, institutions, communities, groups and individuals, micro and macro-politics mutually reliant on each other towards our current/contemporary hybrid condition of time and space.

Project Arc-hive creates an open source digital platform that aggregates, preserves, publishes, distributes and contextualizes a variety of information, knowledge and documentation on art with a focus on biomedia, ensuring open access to a variety of users, and a wide outreach of digital materials across cultural sectors and territories. The talk will address the challenges of creating and distributing cohesive digitization and dissemination protocols through a centralized digital space where knowledge and best practices relevant to art using biological materials are collected.

Arc-hive is a Creative Europe project co-funded by the European Union.

Meta Music Machines is a research project that seeks to develop and build a pseudo-automaton composer, a machine-sculpture that generates new sound creations by recombining information extracted from indexed music from different sound files of human music. A work in progress by Oscar Martín that has been adopting, over time, different formats and names according to the fields of artistic creation and research in which it is shown. On this occasion, he presents the MMM [Flourescent Markov Beat] version in a concert format that addresses the question of rhythm and the synaesthesia between light, color and sound from a minimalist and reductionist approach.

Stefan Tiefengraber will present DOWM, his latest sound-performance project. Three walkmans, three effect pedals, two mixers, a mini-synthesizer, microphones and several feedback loops create a noise-scape that ends in silence and emptiness. In this project, Tiefengraber refers to his artistic method of working, which he implements not only in performances but also in his installation projects. He extends the predefined functions of the used devices by experimenting with them and using unconventional applications. With this way he achieves new and unpredictable results.